The completion of recent ground VLF EM survey reveals numerous structures of interest on the Paint Lake Road Joint Venture property in the Wawa area of Ontario, an area renowned for gold and base metal ores.

Advance United has had success in the Wawa area having formerly developed and sold the Dorset Zone to current owners, Angus Ventures, which hosts a non-compliant resource of 100,000 oz. gold. The full story can be read here. 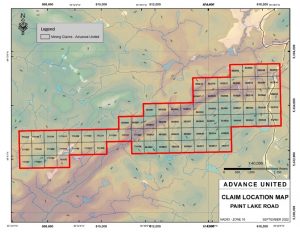 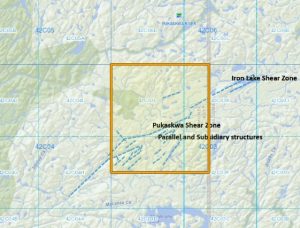 The Property occurs within the Mishibishu greenstone belt that is a broad arcuate syncline 55 km long east-west and 16 km wide north-south. This belt is part of the Wawa Subprovince of the Archean age Superior Province. Supracrustal rocks in the belt are dominated by greenschist facies mafic to intermediate volcanic rocks with lesser sedimentary rocks including iron formation and intermediate to felsic volcanic rocks. The belt is surrounded by Archean granitic rocks and includes two internal granitic batholiths occupying the central portion of the belt.

The northern limb of the belt, where the PLR JV Property and the Mishi Mine of Wesdome are located is dominated by an assemblage of clastic sedimentary rocks, felsic tuffs, and mafic flows. The southern limb, where the Eagle River Mine is located, is dominated by tholeiitic basalts and calc-alkaline andesites with minor interflow clastic sedimentary rocks and lean chert-magnetite iron formation.

The target for exploration on the PLR JV is shear-hosted orogenic gold similar to Wesdome’s Eagle Deposit which is hosted by quartz veins in shear zones hosted by intrusive diorite. The presence of a regional scale shear zone is considered prospective for this type of deposit.

The PLR JV property is underlain by intrusive rocks and as such has been largely ignored in previous exploration programs. The identification of possible shear offsets from the main PIL shear will be further explored with prospecting and sampling.

Drilling has occurred in the past along the PIL shear zone, and gold has been detected in drill core and surface sampling (MNDM Assessment Report # 42C03NW0540). 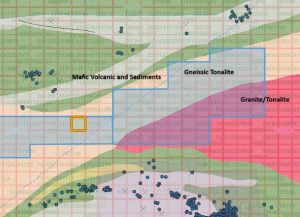 Figure 3: Regional geology of the PLR JV Property from MLAS Web Site. Note projected location of PIL across the north of the property.

The recent survey was focused on the northeastern part of the claim group. 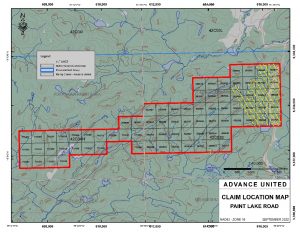 It is evident from the results of the survey that there are at least six northeast trending anomalies identified in the area covered by the survey which could be related to shear zones in the underlying bedrock. 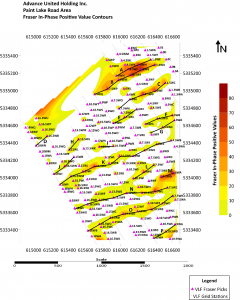 Mr. James Atkinson CEO Advance United, stated “I am excited by the results of the recent VLF EM survey – this area is a largely explored area of the PIL and we have identified EM anomalies cutting the rocks. I fully believe that although this area was not properly explored in the past that exciting results will result from our prospecting and sampling program which will commence in 2023. We are looking forward to further prospecting of the property, and the VLF EM survey will be expanded to cover the extensions of the recently identified anomalies.”

The Joint Venture is a 50:50 with Frontline Gold where Advance United is the operator.

Advance United, headquartered in Toronto, Canada, is traded on the Canadian Securities Exchange under the symbol “AUHI”, the OTCQB Markets in the USA, symbol AUHIF, and the Börse Frankfurt Stock Exchange in Germany under the symbol “9I0”.

Frontline continues to actively seek projects, and additional investor/partner(s) in order to continue to build upon its properties and net smelter return royalties

James Atkinson M.Sc., P. Geo., a Qualified Person (“QP”) as such term is defined by National Instrument 43-101 – Standards of Disclosure for Mineral Projects, has reviewed and approved the geological information reported in this news release. The Qualified Person has not completed sufficient work to verify all historic information on the Property, particularly with regards to historical sampling, drill results, and technical work provided by others. The Qualified Person assumes that sampling and analytical results were completed to industry standard practices. The information provides an indication of the exploration potential of the Property but may not be representative of expected results.