Toronto, Ontario–(Newsfile Corp. – September 28, 2022) – Advance United Holdings Inc. (CSE: AUHI) (FSE: 9I0) (OTCQB: AUHIF) is pleased to report on the completion of its Phase I Work Program at the Company’s Melba Gold Mine project, a past producing gold property in the Abitibi Greenstone Belt near Kirkland Lake, Ontario, Canada.

The Phase I program included opening access to the former mine and validating previously identified gold veins. Additionally, the work team pursued geological prospecting and sampling in new areas.

With reasonable access established and the known gold veins identified and exposed, stripped, and pitted, a total of ninety-four (94) samples were collected and submitted to Actlabs Group of Companies for analysis.

The company submitted the samples to Actlab’s Timmins facility and relies on their internal QA/QC procedures for the analysis. These procedures include insertion of appropriate OREAS standards, blank and duplicate samples, and a review of the results deemed by them to be satisfactory. The lab completed QOP AA-Au (Au – Fire Assay AA) 2022-09-16, 1A3-Timmins QOP AA-Au (Au – Fire Assay Gravimetric) and 1E3-Timmins QOP AquaGeo (Aqua Regia ICPOES) methods for the samples.

“Our Melba Gold Mine project represents an excellent example of the application of our strategy – abandoned mines brought into the twenty-first century,” states Jim Atkinson, CEO of Advance United. “Our field program has been successful in duplicating the past results and has identified the known gold veins on the old mine site. We can now proceed to further explore the mineralization by stripping, continued sampling and drilling. We are also reinterpreting existing geophysical surveys to assist in planning work to expand the known mineralisation to the north and south – covered areas that have never been adequately explored, for extensions of the known gold mineralization.”

About our Melba Gold Mine Project

Gold was first discovered on the property in 1934 and the Melba Mine began development in 1936 but was shut down shortly thereafter with the declaration of World War II.

In 1936 Melba Gold Mines Limited began production and completed a 246 foot (75m) inclined shaft and 900 feet (275 m) of lateral drift work. Over the years, from 1939 to 1988, numerous companies worked the property mapping and grab / bulk sampling and performing ground and airborne geophysics. The property also experienced significant drilling and a compilation of this work indicates significant gold mineralization remains in the old workings. All of the material removed form the underground workings remains on site as a potential resource.

In the past four gold-bearing quartz-calcite veins have been identified and trenched on the property. These include the Rolling Vein, Mike Vein, Blue Vein, and the Contact Vein. Our crews have begun to expose these veins and further detailed sampling will be carried out on the veins.

Geologically, the Melba Mine is situated on a regional shear that appears to originate at the Destor-Porcupine Fault Zone and extends to the south through the Lynx Deposit of the Black Fox Mine of McEwen Mining and the former producing Ross Mine to the Melba area. See map below: 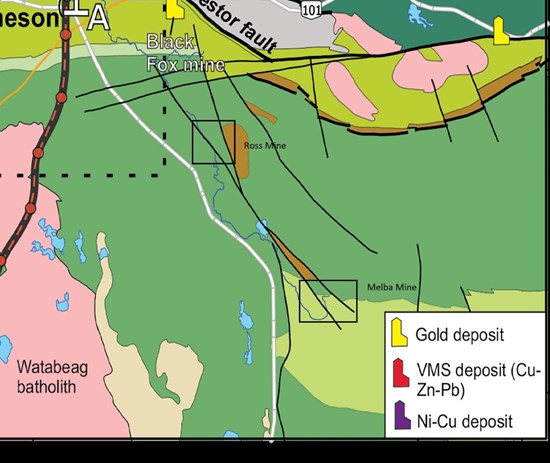 The Ministry of Northern Development and Mines report (ARIS No.42A08SE2005 Gleeson-Ross Mine) indicates that the Melba mine site is similar to the geological signature of the Ross Mine, which is located along the same structure to the NW on strike, in Holtyre, and that the Ross Mine ore reserves were estimated at 628,155 tons averaging 5.88 g/ton (1934) and 518,000 tons averaging 4.64 g/ton (1975). The Ross Mine produced over 1.2 million ounces of gold and 1.5 million ounces of silver over its life.

Advance United, headquartered in Toronto, Canada, is traded on the Canadian Securities Exchange under the symbol “AUHI”, the OTCQB Markets in the USA, symbol AUHIF, and the Börse Frankfurt Stock Exchange in Germany under the symbol “9I0”.

We fund the development of re-working historic data and applying modern technology to underwrite new qualified reports, document quantifiable resources and reserves to current standards, thereby recognizing the current value. Our purpose is to bring immediate and long-term value to our partners and shareholders while seeking to eliminate exploration risk, so that we can all advance united in the shortest possible time frame.