CGR is prepared to sell 100% of its interest in the Landrum Property (the “Property”) to Advance United in exchange for a series of cash payments, share issuances, work expenditures, and other considerations, the terms of which the companies are negotiating in preparation of a Definitive Agreement (the “Definitive Agreement”).

The Landrum property is situated in Edgefield County in southern South Carolina approximately 15 km from the town of Edgefield and approximately 50 km north of Augusta, Georgia (see Figure 1).

The largest historic deposits, measured by approximate million ounces of gold (Moz Au), include those in the Haile (4.2 Moz Au), Ridgeway (1.5 Moz Au), Brewer (200,000 oz Au), and Barite Hill (60,000 oz Au) mines. Noteworthy, the Haile Mine is still in production by OceanaGold. 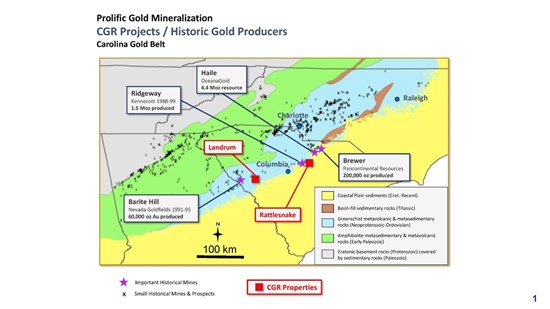 Figure 1: Location of Landrum Project in relation to current and past producer(s).

The last major recorded exploration efforts on the Landrum property were conducted by Newmont Corp. in the mid-1980s. Newmont completed underground sampling of the existing workings, soil geochemistry sampling, as well as limited VLF EM and magnetic surveys. In completing eight (8) drill holes around the known mineralization, intersections including 6 g/t over 9m and 20 g/t over 2.1m was found. 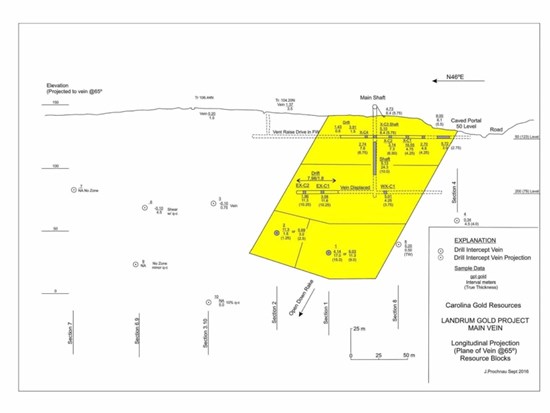 The Main Vein was developed historically on two levels at 50 and 200 feet and systematically sampled in the 1930’s. Newmont re-sampled the 50 level in 1985. The drift sampling was used for the resource calculation. The resource is not NI43-191 compliant but was created by experienced and competent persons. The resulting resource was calculated at approximately 67,000 ounces of contained gold at a grade of 4.82 grams/tonne.

The Landrum veins consist of silicified zones generally made up of 20-50% quartz with admixed sericitized argillite containing 2-10% pyrite with trace chalcopyrite. The veins vary in thickness from less than a meter to 10 meters and occur within a broad sericite-quartz-calcite-pyrite altered shear zone in argillite. The veins and shear strike roughly N45°E and dip 60-70°NW.

Current work suggests that the Landrum system is comprised of two sub-parallel vein systems. The Main Vein has been developed by the historic workings, and the Footwall Vein delineated entirely by the drill holes.

Jim Atkinson the CEO of Advance United states, “We are very excited to obtain a property of the quality of Landrum and are pleased to be able to expand our portfolio and reach internationally to the United States. The existing gold resources are a great addition to our asset base and adds substantial value to our portfolio, substantiating our business model. In this manner, we are designing a work program focusing on confirming the existing resources and expanding the mineralized footprint along strike and down dip – the deposit is open in all directions. Bringing this exciting project ‘current’, in terms of a work program and NI 43-101 will add substantial value and position the property for a potential production partner. The similarity and proximity to other major deposits of the Carolina Slate Belt which have been developed with significant gold endowment makes this project highly prospective.”

Gold was first discovered at the Haile Gold Mine in 1827, and a rich history of producing significant quantities of gold has since been established.

In January 2017, the first gold was poured from the modern Haile Gold Mine after OceanaGold acquired the operation in late 2015. Commercial production commenced in October 2017. In 2020, Haile produced 137,000 ounces of gold.1

North and South Carolina have been gold mining states since before the California Gold rush of 1849 and in fact were the site of the first Gold Rush in America. At the time gold was recovered from placer operations in the “Carolina Slate Belt” and since then large-scale, hard rock mines have been developed with production from at least five (5) significant deposits. To quote a recent USGS publication “The Carolina Slate Belt is a highly prospective belt of rocks with a potential for containing additional undiscovered deposits of gold, copper, and other metals.” 2 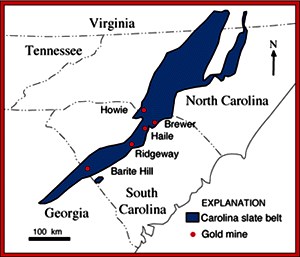 James Atkinson M.Sc., P. Geo., a Qualified Person (“QP“) as such term is defined by National Instrument 43-101 – Standards of Disclosure for Mineral Projects, has reviewed and approved the geological information reported in this news release. The Qualified Person has not completed sufficient work to verify the historic information on the Property, particularly with regards to historical sampling, drill results, and technical work provided by Newmont and others. The Qualified Person assumes that sampling and analytical results were completed to industry standard practices. The information provides an indication of the exploration potential of the Property but may not be representative of expected results.